I’ve always been a writer, but honestly, I was never much of a reader until I had my first child and was up all hours of the night nursing. I started reading on my phone to stay awake and ping ponged back and forth between comedic memoirs like Jenny Lawson’s Let’s Pretend This Never Happened and tattooed bad boy romance novels like Beautiful Disaster by Jamie McGuire and Rule by Jay Crownover. They all spoke to me so deeply. It was like a new fuse was being lit with every book I read, and they all led to the same pile of TNT. Eventually something exploded inside of me and I just started writing. I thought, “I have stories JUST like the ones in these books! Only mine are true! Oh my God, like that one time…” And that’s how 44 Chapters About 4 Men was born.

The last book I read that just left me with my mouth hanging open, staring unblinking at my phone was Souls Unfractured by Tillie Cole. HOLY. SHIT. Being a psychologist I was blown away by her portrayal of Flame’s trauma, self-injurious behavior, and irrational fears. Especially since she had to illustrate his psychopathology through his behavior because he was incapable of expressing his feelings with words. It was an absolute masterpiece. I have a signing with Tillie in August, and I’m going to try real hard to not kidnap her. 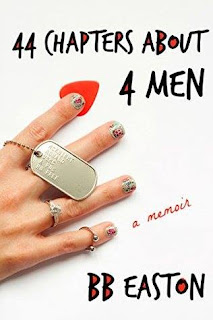 Writing a book as personal as 44 Chapters About Men, that takes a massive set of lady balls! You’re so brave. What was the scariest part of putting yourself out there?
Ha! I think I was born without the ability to feel embarrassment, so “putting myself out there” has never been an issue for me. I was more terrified about the possibility of getting fired, divorced, and/or sued, so I consulted with a lawyer and changed enough details about the secondary characters to make sure I wouldn’t get sued; I decided to quit my job to focus on writing, so now I can’t get fired; and let’s face it, Ken’s not going anywhere. Divorces are expensive and he is the cheapest bastard I’ve ever met.
Hypothetical Question…It’s your birthday… you’re single… Billy Huxley shows up on your doorstep with flowers, chocolate and booze… how do you spend the day celebrating? 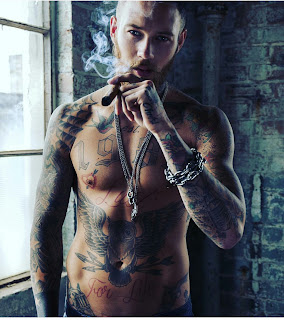 OH MY GOD!!!!!!!!!!!!!!!!! Where do I begin?!?! I guess I’d have to start by convincing him not to call an ambulance after I pass out. Then I’d have to convince him not to call the cops after he discovers the tastefully small shrine I created in his honor. THEN I’d have to convince him that a restraining order is TOTALLY unnecessary after I cut off a teeny tiny insignificant amount of his hair to add to said shrine. Then I’m sure he’ll realize my devotion, fall hopelessly in love with me, and we’ll end the night getting matching wedding band tattoos.
Will your next book have any auto-biographical elements to it? And can you tell us three tiny details about it so we can get super pumped?
Oh yes! The BB character is 100% teenaged me – my reactions, my thoughts, my quirks – and Knight’s character is as close to the real Knight as I can remember. I was probably the only person who ever got to know him, and I feel a responsibility to show the world that he wasn’t the monster he wanted them to believe. The rest of the book is kind of like a mashup of my teen years. The characters and situations are similar to people I actually knew and shit that really went down, but I’m giving myself full creative license this time around. It’s fiction “based on a true story.”
Three Tiny Details…
When did you have your first “Holy Shit, I’m an author, like for reals this is happening!!!” moment?
It started when I cracked the Amazon Top 100 Bestselling Memoirs list a few days before my book had even come out. I was like, “Oh shit. This is for real!” Then a week or two later Colleen Hoover promoted my book on social media and 44 Chapters About 4 Men flew into the Top 10. Suddenly I was ranked higher than Jenny Lawson, Chelsea Handler, Amy Pohler, Tina Fey…my fucking idols. I remember just staring at my computer screen, completely unable to process the image of my puny little self-published Frankenbook rubbing elbows with all these international bestsellers. Then I screamed at Ken for not being excited enough about it.
Bonus Question:
Its no secret that you consider all of your loyal readers and fans to be your friends…
SO:
When are we having our girls night?
Come to Just Another Book Signing in Miami on August 6th, Authors at the Opry in Nashville in September, or the Golden Gate Author Signing in San Francisco next March and it’s ON.
Who’s bringing the cookie dough?
Eve Mundo. If it’s shaped like a giant penis, she’s in charge.
Who’s bringing the nail polish?
Brandi Harvey. That girl actually had the same sugar skull nail stickers that I wore on my book cover just laying around. She’s my nail twin.
Who’s bringing the gossip magazines?
Kellie Richardson. That girl has the inside scoop on errrybody.
Which 80’s chick flicks are we watching?
Ferris. Beuller’s. Day. Off. I don’t know if it’s a chick flick, but I named my daughter after one of the characters. ☺ And if we’re talking 90’s then Buffy the Vampire Slayer. I will probably still be able to quote that entire movie on my deathbed.
& Which boys are we prank calling? 😉
All of them. ALL the boys. Especially Ken. That motherfucker.
If you’re a huge fan of Bebe Easton the Badass Chica and/or the Author, find TeamBB on Facebook! Its full of naughty girls have a crazy fun time. And lots and LOTS of this guy:
You Can Also Find BB Here:
| AMAZON | GOODREADS | INSTAGRAM | TWITTER | FACEBOOK |
And if you haven’t Already, Click on the Book to Purchase: